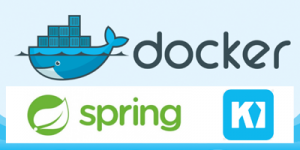 I have a little side project that I develop when I have moments of spare time. It’s a configurable engine that aggregates news feeds, bundles them up and displays them through a variety of web sites and mobile apps.

It’s really just a pet project that I enjoy playing around – especially for learning new tech. It’s been through a few iterations over the last 5 or so years:

The driving force between each iteration has largely been to make it simpler and more robust As I’ve come to realise with spare time projects – less is more. They are the kind of things I dip into when I have a few days/weeks spare, and then don’t touch for prolonged periods of time while real life gets in the way. As such, all time is precious and the more time it takes to get environments configured, and get your head back into the code – the less time you have to actually to the interesting stuff.

In addition, while I’m not working on it – I don’t want to be bothered by it. I need it to run efficiently and quietly without needed any interventions by myself.

In years gone by – I’d occasionally get notifications of servers going down (usually memory/disk space) issues – and have to jump in, roll up the sleeves and get it all working again. Since moving to Elastic Beanstalk (and generally upgrading the app code) over the last couple of years – it’s been completely hands off for me. The server keeps discovering and making available new news items, cleaning up and pruning old ones and Amazons infrastructure takes care of the rest. Happy days.

The Next Evolution – Spring Boot + Docker

So, it’s working well, but, well – technology moves on and you’ve got to keep up with it. Also – I need to start adding new functionality – and it’s always more enjoyable to discover and play with the latest developments.

So – what’s next in the evolution of my app (aside from a Java 8 upgrade)?

My main drivers are being able to pick up and work with the codebase easier. From cold, get everything up and running on my local dev environment asap and with minimal fuss (I like to rebuild my iMac every now and again – so like to have an easily recreated, lightweight and transparent dev environment)

On the back of this then – there are 2 changes I want to make (which I’m already sold on both from previous work).

The first is Spring Boot – my Spring setup is pretty lean as it is – I use Spring extensively (Spring Data, Spring MVC, Scheduling, etc) – and I’ve mostly moved to Java config, but there are a few XML config stragglers. Up until now, I’ve been building the usual WAR and deploying it to Tomcat/Jetty. Converting to Spring Boot is an opportunity to streamline this even more – get rid of XML config completely, and make the existing code even more lean with the auto config options.

The second is the use of Docker. After a machine rebuild a while ago I had to go through the motions of getting Postgres installed again – and it just all felt a bit klunky and brittle. I had a look at other options – and had a play with running a Docker Postgres image through Kinematic. It was a breeze – nice, simple and self contained – check out my full post here – https://www.adrianmilne.com/installing-postgres-with-dockerkinematic-on-os-x-in-under-30-mins/.

Running the Application Outside Docker 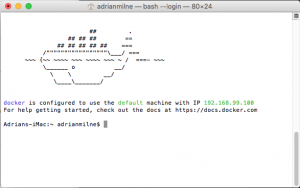 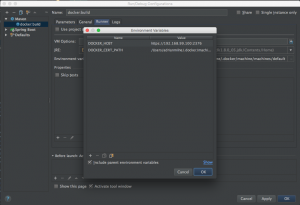 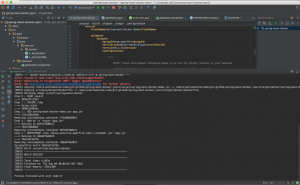 Running the Application Inside Docker 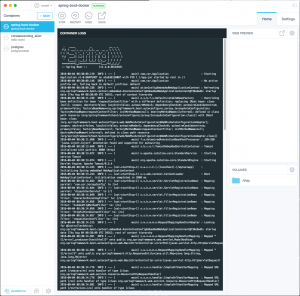 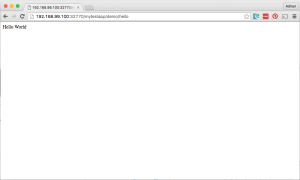 This goes under src/main/docker (configurable via the plugin below)

Everything in the Dockerfile can be configured in the docker-maven-plugin if needed, but I preferred to use a Dockerfile to get more familiar with the native settings and syntax.

And that’s basically that – very simple to set up once you know what needs to be done (had a few issues to overcome along the way – which was why I thought it was worth sharing).

Next step would be to replace my Amazon Tomcat Elastic Beanstalk deployment with a Docker one. I started looking into this – looks like I need to deploy my container to Docker Hub (or similar) – and then I can reference it from there the Elastic Beanstalk setup.

(and then apply all this to my existing application)

Think that could form the basis for a follow up article!