A tale of a brand new disk drive, a 2TB backup, a disk failure and finally a recovery…

I recently bought a 4TB Western Digital Elements external drive in the Black Friday sales to add to add to my backup family. I formatted it and started with a 2TB backup of my 4TB (2x2TB RAID1 WD MyBook Duo). It all started so well…

I plugged both into my MacBook Pro. Its a 2017 model so has no native USB or Thunderbolt 2 ports – just USB-C, so I had to use adapters to plug in my drives. The MyBook Duo used the official Apple Thunderbolt adapter – which is pretty solid, and the WD Elements was plugged into a 3 port USB hub – which is a bit flimsy.

I set the copy away. The 2TB transfer was left overnight and during the day. When I got back from work it looked like it had finished ok. I could see the files on the drive – I even moved a couple of folders successfully on the new drive. I then plugged another WD Elements (an older 500GB one) into one of the other USB hub ports – and both drives disappeared from Finder.

The connection was flimsy – so I figured they both just lost power and reset. Lights were on and flashing, but now they were not visible in Finder.

Cue several attempts and unplugging, replugging, restarting the computer. Whatever I did – I couldn’t get the new 4TB drive to show. A quick google revealed this wasn’t uncommon, and a couple of posts mentioned issues with Sierra. So the first thing I did was update the OS (to High Sierra – as it turns out – a pretty substantial upgrade).

The drive was still invisible to Finder and Disk Utilities. A bit more digging revealed the drive could be seen in System Report (via Apple logo on menu .. About This Mac .. System Report).

Mac Book Air to the Rescue

The next thing I tried was plugging the drive into an older Mac Book Air I have (which was running an older version of macOS).

Success! I could at least see the drive in Disk Utility now. I tried a Verify, and then a Repair – which initially looked promising as it found a problem… but then it said it couldn’t repair and I should consider reformatting.

Ok – no problem. I don’t mind losing the data – I just want a working drive back…

Next step then was to force it to unmount from the command line. Opening the terminal and typing:

This will list all your drives. On my machine the 4TB WD Elements was /dev/disk1. Then to unmount it:

Ok – so can’t unmount it. A bit of googling revealed this was because some process had a hold of it  possibly Spotlight, possibly something else. After trying a few things – finding and killing a fsck process which had a handle on it worked for me:

After that – the disk became available again and I could Erase it in Disk Utility.

Not an ideal end to a couple of days of backing up, but at least I’ve got the disk back.

Not sure. It was fine, and then it wasn’t. My best guess is that it was the flimsy USB connector causing a power outage while writing (it wasn’t writing at the time – but maybe it was doing something under the hood). This was the set up before the problem: 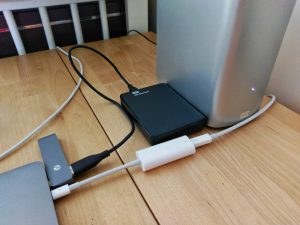 As you can see – the MyBook Duo is using a thunderbolt connecter which is pretty solid, and the WD Elements is using the USB hub connector, which sits quite loosely in the port, and can cause connetion (and hence power loss) if jiggled.

I’ve now replaced this with another official Apple connectoer (like the Thunderbolt one). This is a very solid connection, so shouldn’t lose power unintentionally. 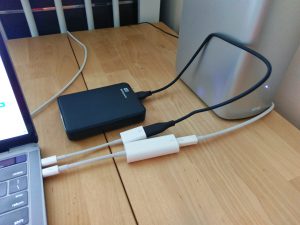 More importantly, I’ve learned (re-learned) a valuable lesson. I’m normally pretty good with my backups – I’ve got my most precious data backed up in the Cloud, on my RAID1 drive and also offsite. However, I had been tempted to start cutting corners with this new drive as the volumes of data (mainly photos) I need to store are increasing exponentially – and I thought it would ‘probably be alright’ to have a single copy of some of my less important data. I think the lesson is – suck it up, back it up and do it multiple times if you want to be sure – there’s no shortcuts.

And also look again at Blu Ray backups. I like the idea of having stuff that can’t be accidentally wiped (through human error or malicious intent)